When you learn about vectors in math, you’re usually learning about a specific type of vector called a Euclidean vector. Most authors just shorten the name to “vector” and assume you know that you’re dealing with vectors in Euclidean space. Vectors in this “Euclidean” sense are extremely useful for many mathematical applications.

A vector starts at the tail of the arrow and ends at the head.

As a simple example, let’s say you wanted to walk a mile home from work. A scalar tells you how far (1 mile) but in order to get home you need to know which direction to walk: North? Southwest? East? EEW? A vector tells you how far and in what direction: 2 miles West.

Usually, vectors are denoted by bold face type: V. They can be written mathematically in a few different ways. For example, take the following vector, represented by an arrow: The vector is placed on this coordinate system (a Cartesian plane) at location x = 2, y = 4, which can be written as an ordered pair: (2, 4). The vector, which tells you how far a point is from the origin, can also be written as:

Note the circumflex above the x and y: that tells you you’re dealing with a vector.
The same vector can also be represented by an array (grid):

Note though, that you need to give the array a context in order to fully describe the vector. As we’re dealing with an x-y coordinate system here, the array would be fully described by:

Watch the following TEDEd video for a fantastic (and short!) overview of vectors:


What is a vector? - David Huynh
Watch this video on YouTube.

Finding the Magnitude and Direction of a Vector

Let’s take a look at line AB on the following graph: 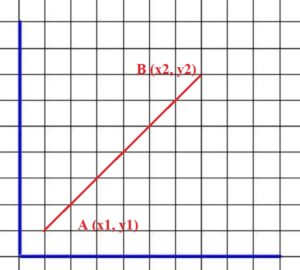 To find the magnitude of vector AB we need to determine the distance between points A and B.  Where we are provided with the coordinates of the points we can use the distance formula).

The formula for distance is:

Plug the values into our distance formula:

Determining the Direction of a Vector

To find the direction of a vector we measure the angle that the vector makes with a horizontal line.  We use the following formula:

First, we plug the coordinates into our formula for direction:

To find the direction we use the inverse of tan:

Vector AB has a direction of 59 degrees.

Check out our YouTube channel for hundreds of videos on elementary stats, linear algebra and more!

A zero vector has no magnitude and an undefined direction. It is usually denoted by a bold 0 , 0→ or

Zero vectors have no length, so therefore have no direction.

In many ways the properties of null vectors are similar to the number 0. Consistent with the additive identity property, when we add a null vector to vector a the result is vector a:

Where a null vector is subtracted from vector a the result is vector a:

Zero multiplied by vector results in a null vector:

Finally, the null vector is perpendicular to every vector of that vector space.

The additive identity property tells us that you can add any number to zero and that number remains the same. In other words, any number added to zero keeps its identity. For example:

More formally, you would say that:

The set of natural numbers (whole, non-negative numbers that we use to count) doesn’t have a zero, and so doesn’t have an additive identity.

Vector addition is used for many fields including physics, engineering and computing, but where it really excels is at showing some fundamental differences between vectors and scalars.

The dot product is used to multiply two vectors with the same number of dimensions.

When the dot product multiplies two vectors, the end result is a single number. In other words, the answer will be a scalar and not a vector. For this reason, the dot product is also called a scalar product.

There are two ways to calculate the dot product of two vectors.

We can multiply two vectors lengths together where they point in the same direction.  For this reason we multiply by cos(θ).

The second method is simply to multiply the x values together, then multiply the y values and add the two sums together.  The formula is:

Find the dot product of vector a and vector b:

Either of the two formulas will solve this problem.

The dot product of vectors a and b is 14.

One final point worth noting.  You will occasionally encounter two vectors that are at a perfect right angle to each other.  In those cases, the dot product will always be zero. A vector field (sometimes called a directional field) represents the solutions to a first order differential equation of a scalar function. A series of tic marks indicate slope. The terms slope field and vector field are sometimes used to mean the same thing, but there is an important difference: The marks in vector fields vary in length according to the magnitude of the vector; All the tic marks in a slope field have the same length.

Extremely complex vector fields can be generated quickly (by a computer), so they are often the first step in understanding a problem before a decision is made on how to find an exact solution. They can also be used to outline possible solutions or to generate numeric solutions through more complex routines.

A vector function (also called a vector-valued function) takes in a real number as input and returns a vector. For example, if your real number is represented by the letter t, the vector valued function might return [h(t), g(t), f(t)]

In some cases, it may take vectors as inputs also, and there are some functions of this type with infinite-dimensional vectors as output.

This class of functions enables you to summarize a lot of information in a single statement. They can help measure many things in physics and engineering: Position, velocity, acceleration, and force can all be measured by a position vector.

When we use position vector valued functions to describe a graph, our function will have the form:

This one function has summarized all the information in the parameterized three-part series of equations that reads:

The image below is the graph of the function r (t) = [2 cos t,4 sin t, t]. This one function gives complete three dimensional position information over all t. A linear vector valued function can be written as: