What is a Characteristic Function?

The characteristic function φ(X) of a random variable X is:

Some of the more common functions (e.g. the normal distribution and binomial distribution) have already been defined (adapted from Lee & Lee, 2010): 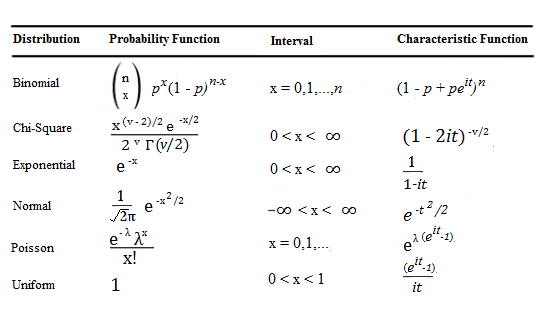 Finding others can be more challenging, but some rules have been formulated (much in the same way a set of rules for finding derivatives of functions have been found in calculus). For example, if a function is the sum of two independent random variables X and Y, then φ(X,Y) = X + Y (Battin, 1999).

Outside of probability (e.g. in quantum mechanics or signal processing), a characteristic function is called the Fourier transform. The Fourier transform in this context is defined as as “a function derived from a given function and representing it by a series of sinusoidal functions.” In other words, it’s a recipe (made up from sinusoidal functions) for a specific function of interest.

A characteristic function is almost the same as a moment generating function (MGF), and in fact, they use the same symbol φ —which can be confusing. Furthermore, the difference is that the “t” in the MGF definition E(etx) is replaced by “it”. In other words, the imaginary number is not present in the definition of an MGF. Therefore, the characteristic function has the advantage that it always exists—even when there is no MGF.